Hello everyone, its been a while, but I’m back.  I figure I would start off a new year with a portrait of one of our Gecko’s.  My wife has been photographing them as they roam around their terrarium.  I looked at some of her awesome photos and got the inspiration to attempt to draw a really big portrait of one of the Geckos.

Karen, my wife, wanted to spend some quality time together doing arts and craft so it was the perfect time to start another portrait.  Sitting around the dinning room table, we all partake in our crafts.  My mother was over as well and was coloring in the adult coloring books, which are pretty cool if anyone is interested in coloring. It took about two hours to complete and it was very relaxing.  The hardest part was trying to get the bumps to look bumpy in the skin.  Further down the Gecko’s body is a section of lots of bumps.

Using the graphite pencils numbers 5H, 3B, 6B, HB, blending stump and a brush I was able to create and manipulate the graphite into the drawing I wanted.  The most important thing was to be graceful when filling in the eyes.  If I pressed too hard with the pencils I would damage the tooth in the paper and cause it to flatten, which makes a shinning effect, which can ruin the overall picture.  Graphite requires you to perform hatching method when attempting to fill in an object.

Bare with me and keep coming back to the site you will see more of my drawings. 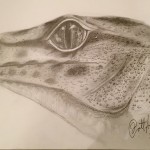 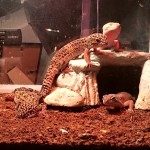 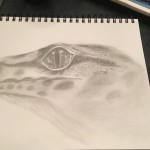 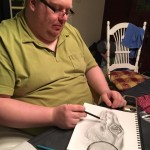 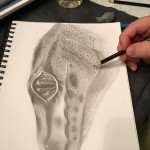 No its not the Gecko from the Geico TV ad’s  I have four Leopard Gecko’s.  They are small and interesting lizards.  Fierce hunters of crickets and worms, but gentle when handled.  They are one of a few species of Gecko’s that can actually close their eyes and lick them.  Most other species have no eyelids and are kinda freaky to look at.

I will be doing more drawings and paintings of them, but for now, here is one I did using graphite pencils, charcoal and a blending stump.  Took about an hour to complete.