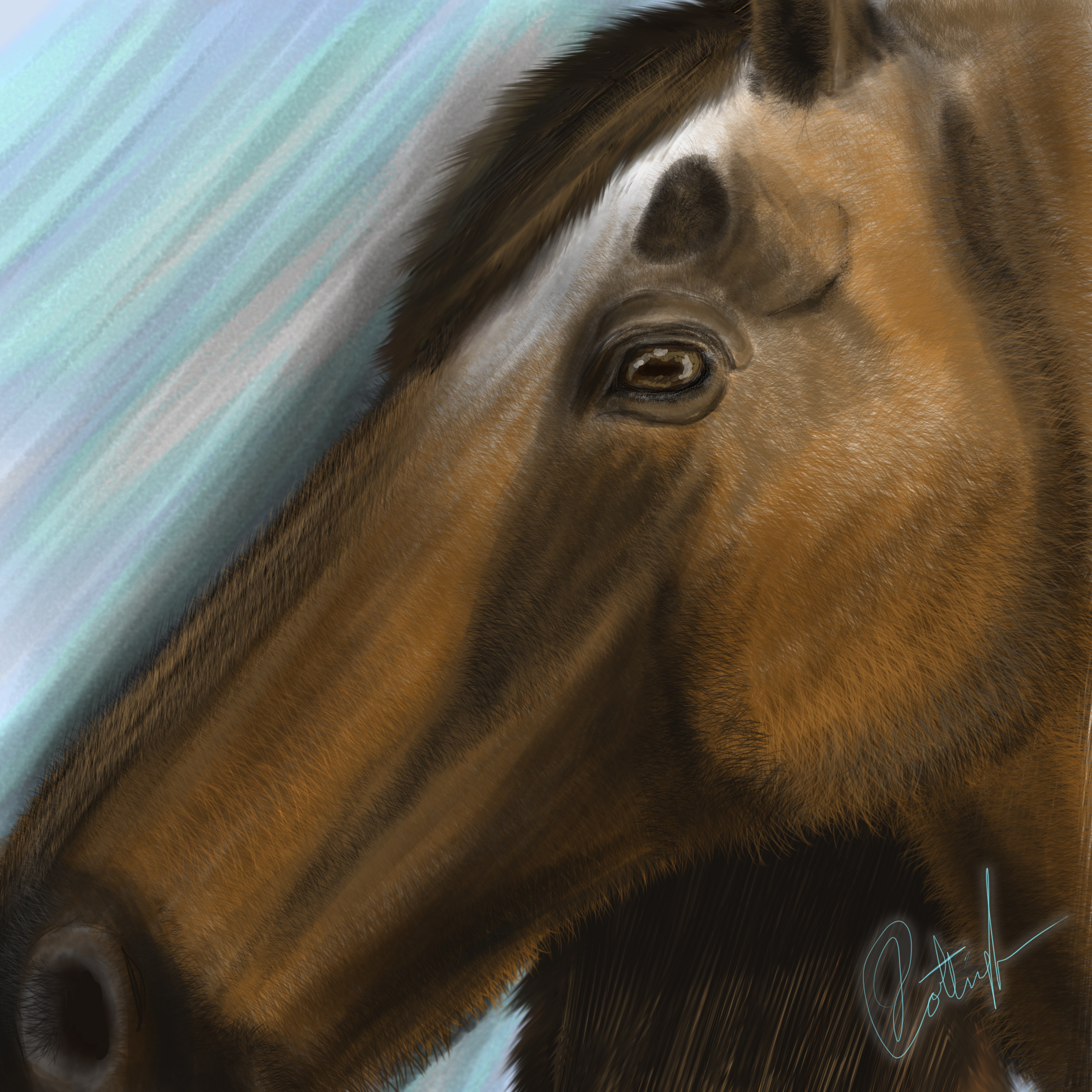 Switching things up for a bit, decided to do some Digital art.  Basically it is a major challenge for myself, because I’m use to drawing directly on the paper.  Where as drawing with a stylus on an external pad and looking at a monitor is really a challenge.  The cool thing is that its much easier to fix mistakes made on a computer than on paper.  The bad thing is that its a lot of coordination is needed.  Unless you have a computer that allows you to draw on the screen, it’s no where the same as drawing on the paper. 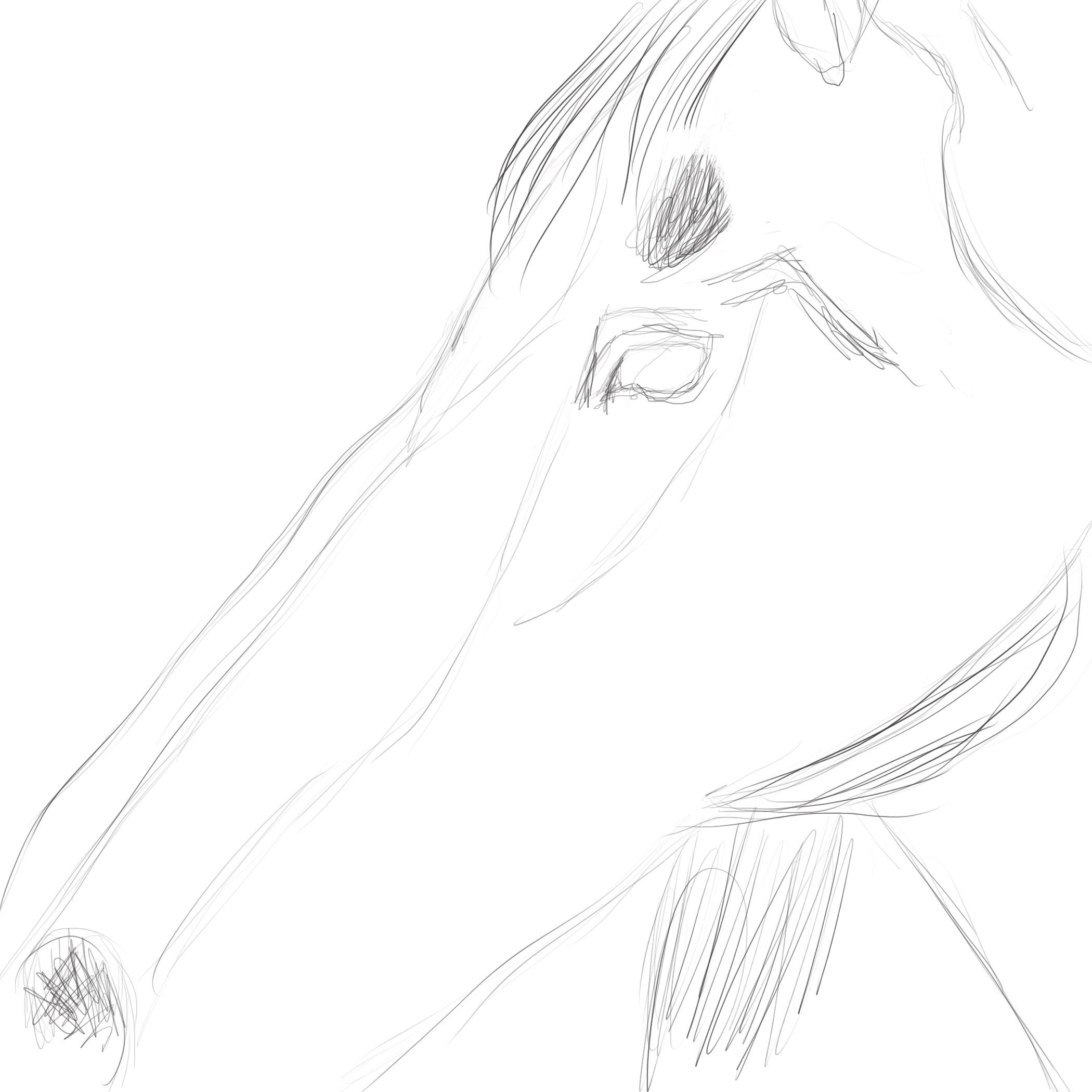 First I laid out a basic sketch of the horses head.  I used a base layer for this and a basic brush.  Afterwards I started to build the textures of the fur and shadows up by layer by layer.

I will be doing more drawings, I promise.  🙂 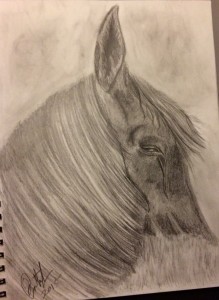 A portrait of faith sleeping. 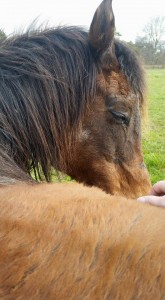 A sleeping horse portrait of Faith.

Here is a graphite drawing based upon a photo of Faith, our horse, laying down sleeping.  I tried to work on as much detail as possible to attempt a realistic drawing.  Total render time was about two hours.

I spent most of the time on hair, very tedious amount of work.  If you are in a rush, this is not a drawing for you lol.  I used a technique of layering and blending with a brush and then I would take a kneaded eraser and with a flight of the wrist, pull the highlights out for the reflected light on her hair.

I was so focused on doing the hair that I just couldn’t help myself, but to make it longer.  It’s my drawing and I will draw it the way I want lol. A color pencil drawing of Faith

Decided to draw a picture of our horse Faith, using color pencils and a burnishing technique.  It took about 3 hours to complete.  It was very difficult and time consuming, but it was relaxing.  I was inspired to use the burnishing technique by another artist named Heather Rooney.  If you have a moment you should google her and check out one of her drawing videos.  She is very talented and each one of her portraits looks extremely real and takes about 22 hours to draw.

I will be trying this technique more often, its going to take a lot of practice.

As a bonus, I have included a youtube video of me drawing Faith.  It is a time lapse to show you how I was drawing and burnishing her. 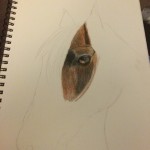 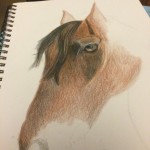 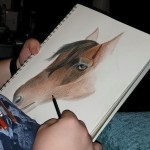 Live shot of me drawing while watching tv 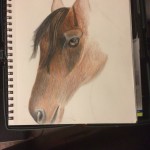 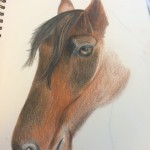 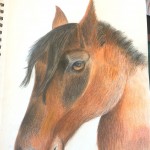 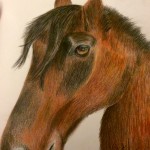 A color pencil drawing of Faith

A story about Faith This is a very special project and an amazing story of a horse rescue in Virginia.  It’s not art, but a quick documentary of my wife’s accomplishment with restoring life and hope to a severely abandoned horse.

The horse was neglected and eventually sent to auction, where no one wanted her.  Her last change destination was a slaughter house auction lot.  Where if she was not bought, she would have been slaughter for meat.  An organization stepped in at the last moment and purchased the horse.  My wife was on a mission to find the perfect horse for her.  She searched many groups, looking for the right horse.  Then one day, we found Faith aka “Leap of Faith”.

She was located in Pennsylvania, not in Amish country, but the mountains.  Let’s just say it was a very long and tiring journey.  For just about two days of traveling, we pretty much lived in the truck.  Just me Karen and our dog Jack.

We finally made it to the second change farm to pick up our new family member.  She was very thin, had a lot of cold/infection coming out of her nose.  Not doing so well.  I have to admit, that I was very skeptical of her survival during transport back to Virginia.  It was during summer, and it was very hot.  However she made the trip without any problems.  Matter of fact, we ended up staying at a Motel 8, because we were so tired.  I told the front desk clerk that we have a horse and a dog.  He was accommodating and allowed us to park on the side where the big rigs park and our dog was able to stay in the room with us.  It wasn’t the best hotel but it was home for the night.

We finally got her back to Virginia.  I was so tired, that I literally passed out in the passenger seat and didn’t wake up until we were like in the Salisbury MD area.  I was asleep for like 400 miles.  Thank God for my wonderful wife, for driving.

Anyway, for Christmas, I decided to take all the photos from my wife’s Facebook Page and compile them into this presentation.  I was trying to keep a secret for a long time.  Our washer was having some problems during the same time period, so I was actually compiling the video at a laundry mat in secret.  The people there thought I was strange with Bose earphones on and constantly pecking away at the keyboard.  I finally composed the DVD and played it for her on Christmas morning.

(Note: For some reason the music to the video is only allowed to be played on non-smartphone devices.  So that means you will have to watch it on a computer for now.  Something to due with the licensing of the music I used.  Hopefully that changes.)